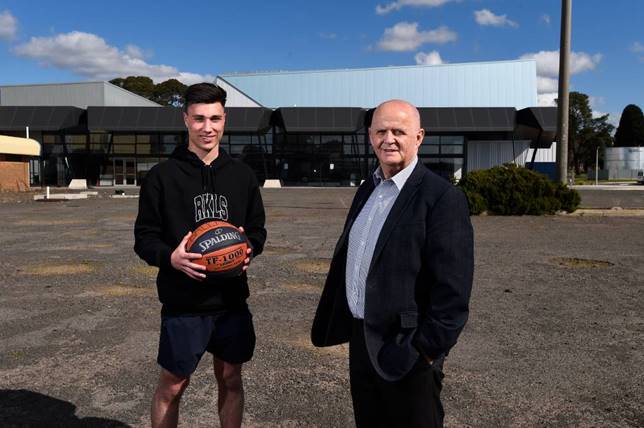 HUSTLE HOPE: Basketball Ballarat's Connor Carey and Peter Eddy on the site of what will be an international and Olympic sport phenomenon in Ballarat.

PLANS to add a new kind of showmanship and accessibility in the game could now offer hope in the new COVID normal, Basketball Ballarat's chief says.

New purpose-built three-on-three basketball courts will be constructed outside Ballarat Sports and Events Centre, on the site of the old car park, within the next year.

The three half-courts were to be a feature piece in the stadium precinct, with Ballarat the only city outside Canberra to have permanent courts for the modified version of the game that is set to become an Olympic event.

Basketball Ballarat has been aiming for the 24-hour courts to engage at-risk youth and busy people unable to commit to regular structured competition but with mini-tournaments and pick-up games that have proven popular in the nation's capital.

"In a post COVID environment, outdoor sports will be seen by many as a safer option. Even when it comes to space on court, there are three players aside opposed to five and more room," Mr Eddy said.

"It certainly opens the sport up to being more COVID friendly. Even for families who are still recovering from the situation they find themselves in financially, this is an affordable option, or for those who want to do their own thing in a community space."

The courts will be delivered under a $5.2 million state government grant for stage two development at BSEC. Add-ons to the $24 million stadium will include a community gym, learning spaces for Federation University and University of the Third Age, and a new facade on the original structure.

Mr Eddy, the lead advocate for BSEC and Ballarat Indoor Sports, said the green light on the project also offered job and economic hope coming out of the pandemic. Stage two is yet to go to tender.

Three-on-three is also designed to bring Ballarat and the western region ready-made tourism and event potential.

BSEC will have three purpose-built three-on-three courts with funding for a fourth to create a nationally approved portable model.

This will allow for the potential to showcase games anywhere on a flat surface, like outside Ballarat Town Hall or near Ballarat Botanical Gardens for festivals. The court can also be set-up in neighbouring towns like Ararat.

Basketball Ballarat last month recovered the hosting rights to the national under-18 and junior wheelchair championships for 2022, having twice had the simultaneous tournaments axed in the pandemic.